Caveat is a collective research project initiated by Jubilee, reflecting and acting on the ecology of artistic practice. Emptor continues along the methodology and efforts of Caveat. It actively applies the practice-based approach to 'property', a concept that highly defines the economy of visual arts.

Download here the compiled reprint, created for this occasion, of Materialization of Life into alternative economies (1996), Promised Relations: or, thoughts concerning a few artists’ contracts (1996), and Project Series: Archive Contracts (2005) by Ben Kinmont. 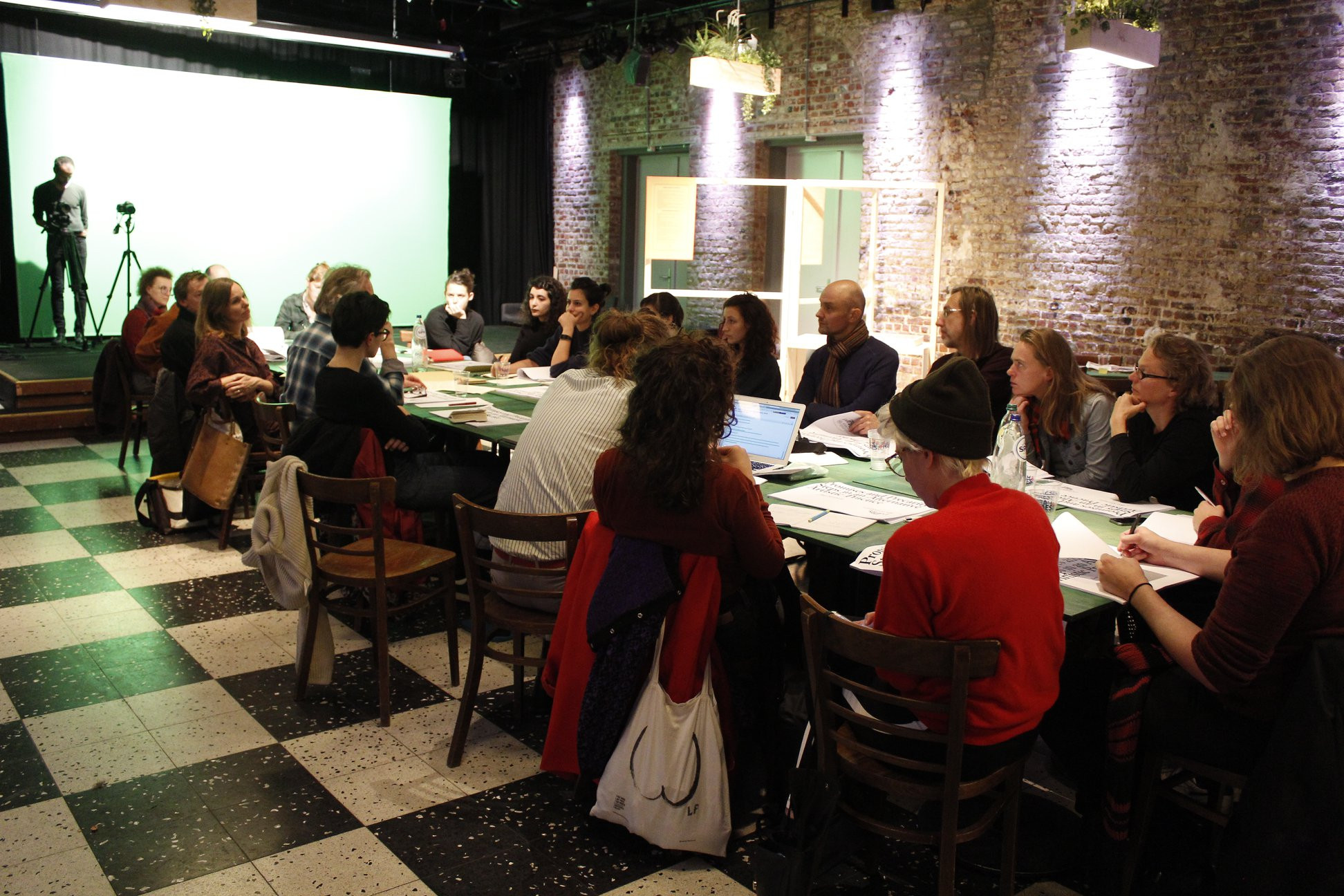 07:20
Materialization of Life into alternative economies (1996) Publication created in the context of a show of the same title (Printed Matter, New York, 1996) on dematerialization of work of art, or rather: materialization of life. Larger context than just art history or art institutions. Alternative to a capitalist practice with galleries.

17:30
On Worthless and valuable, show in Ljubljana

19:30
On motivations to create Worthless and valuable: BK felt unhappy about the general discourse going on in New York at the time, and needed to have a more direct effect on it even on a modest, small exhibition scale. Result of trying to clarify the own position and practice.

24:30
On the New Museum as an anti-institutional institution, whose collection had an ‘expiration date’, nothing was allowed to be in the collection for longer than a certain period.

26:20
RH mentions that there's a difference between success, becoming rich, and making a living.

29:00
Reading out loud BK's introduction to the publication by member of the audience, and BK elaborates on it

[31:20]-35:20
On contributions to the publication Materialization of Life into alternative economies

33:20
On On Kawara's 'curating' strategies in his mail art

35:20
On the phenomenon of catalytic texts

36:00
Promised Relations: or, thoughts concerning a few artists’ contracts (1996) On the occasion of the show of the same title. Goals: creating better contracts regarding ownership of archive, and exhibition of archives.

38:30
On the influence of Sol Lewitt's instruction pieces and certificates for them.

39:50
On BK’s particular kinds of archives on display: to be manipulated and added upon

41:00
On Christo's method's of financing his projects and his own more archiving reactions to them

44:00
On BK’s archive contracts, regarding changing and living archives (in case of theft, etc)

45:30
On BK’s archives of contracts. His contracts have developed towards stating intentions, and have become less about enforceability.

47:00
On Seth Siegelaub’s and Bob Projansky's The Artist's Reserved Rights Transfer and Sale Agreement/Paula Cooper (p 16), and their influence on legislation in California.

50:00
Reading out loud by member of the audience: fragment by Jean-Jacques Rousseau (left hand side of title page).

50:50
On freedom and empowerment through contracts.

52:00
Reading out loud by member of the audience: fragment 'Touching' (p 5), BK elaborates on it.

54:00
BK on contributions to the publication Materialization of Life into alternative economies

56:30
Reading out loud by RH: fragment 'Various times and people' (p 12) on verbal contracts, and RH and BK discuss it. Notions of freedom and restriction surrounding contracts, in relation to Rousseau.

59:00
BK asks the audience who has written their own artist agreement, and who has been asked to sign an existing contract. Ronny Heiremans, Julie Van Elslande and BK discuss their experiences with that. Signing of the contract as a ritual. Asymmetry, budgets, language differences, difficulties of communication with institutions.

1:03:00
RH asks whether BK succeeds in using his contracts, and in what stage of a project. BK: very clearly discussing priorities in an early stage, often in a contractual language, in such ways that they become more or less clauses in the eventual contract. “I’ll say: you’re inviting me to this exhibition, because ‘this’ is what I do. So if you don’t want me to do it, please invite someone else.”

1:04:40
The more powerful an institution is, the higher the probability that one's concerns are swept off the table. Institutions are frequently panicking.

1:06:40
On dealing with problems. Example: Whitney Biennial, Shh project where they couldn't/wouldn't take care of the display shelf with giveaway copies the way BK asked, until he announced that his brother would come take care of it. Other example: negotiating materials and fabrication expenses when an institution doesn’t offer an artist fee, and take a fee out of the former.

1:15:20
Question from Joséphine Kaeppelin: Does the time you indicate in 'The micro-economy of this catalogue and its exhibition' include time you use for research? BK: Yes. The fee is also calculated as a compensation for time not spent on other things.

1:24:30
BK reads out and elaborates parts of archive contracts on subsequent pages.

1:27:00
On own antiquarian practice and distinction of custodianship and consumership.

1:29:00
On publication and site specificity.

1:29:30
On sustainable, 'healthy' and ethical concerns in own practice. On syntax as a working method.

1:31:30
Stijn Van Dorpe: does the archive automatically stop when you die?
BK: My latest answer is: No, the archiving continues, under guidance of institution or specific friend/colleagues who are being trained to do this.

1:34:00
On archiving responsibilities of the institution.

1:36:00
Julie Van Elslande asks BK about language and absence of legal language, and about the possibility of putting the law aside. BK: I want to use my own language as much as I can, to explain what I want. On clarity and enforceability. BK does not intend to do put the law aside. Discusses existing contracts, and rarity of court purposes. Use value of contracts is often rather practical.

1:39:40
JVE on changing forms of relationships and legal contexts. BK: In those contracts I'm mostly interested in clarifying what the art work is, and identifying the relation with the institution. Not so much in changing policies or the legal framework.

1:41:30
RH on empowerment and (a)symmetry in power relations. BK on the contract as a tool for sustainability, assigning value to worked time: Asymmetry in power is an obstruction to the evolution of the Idea of art. Contracts do not only serve the freedom of the individual artist, but also the freedom of the evolution of art. Institutions’ written contracts are like chains on our activities whether it be through marginalization of the artist or a misunderstanding of what you are doing. The contract can be a means of clarifying one’s discourse.

1:44:10
Katleen Vermeir on practicality of contracts and their role regarding court cases.

1:45:00
BK on getting mad at an institution. Example: Carl Andre ran a full-page ad in the New York times stating that a piece wasn’t his work anymore after MoMA installed it wrong. Contract is an opportunity to clarify what the life of the artwork should be after it has been absorbed into an institution. What’s important about a piece?

1:47:00
BK: artists often aren't analytical and detail-minded or willing enough or capable enough to write their own contracts. On writing in his teaching practice.

1:49:30
On attrition (drop-out rate) of artists, and debt. “Think of your practice in a broader context: How does one develop a practice which is sustainable if you want it to be? The average American artist graduates with between 35 and 40 thousand dollars of study debt. What do you see as success? Do you want to go on vacation once a year?”

1:52:00
On motivations for leaving galleries and starting Antinomian Press.